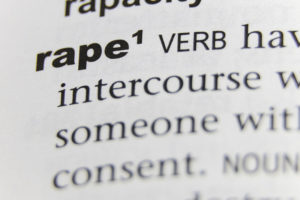 Rape myths are prejudicial, stereotyped, or false beliefs about sexual assault, victims, and aggressors. Although these myths have no factual basis and have frequently been debunked by science, some individuals in society continue to rely on these antiquated false ideas. Our attorney Kristi Schubert wrote about some myths you may have encountered, and the truths you can use to debunk the myths when you encounter them again.

Myth: A victim of sexual assault or rape who does not scream or physically fight back must have wanted it.

Fact: While you might expect victims of assault to display behavior like screaming, hitting, and physically fighting back, many victims do not. Scientific research suggests that 50 to 70 percent of victims of sexual assault experience a fear-induced state of “tonic immobility” while the assault is occurring. Tonic immobility is a state of involuntary paralysis in which an individual cannot move, and in some cases cannot even speak. If you have ever seen a deer in headlights, you understand the concept. Tonic immobility sometimes happens to people during other traumatic experiences (e.g., shell-shocked soldiers and car crash victims), but it is so common in sexual assault victims that it is often referred to as “rape-induced paralysis.”

Myth: Forcible rape is rare and not likely to happen to anyone you know.

Fact: According to studies by the National Victim Center and National Crime Victims Research and Treatment Center, one in eight women (13 percent) will be the victim of forcible rape in her lifetime.

Myth: A person who has been sexually assaulted or raped will be hysterical and crying.

Fact: An individual victim’s personal characteristics, coupled with external factors like the identity of the perpetrator, the location of the assault, and other outside factors make it impossible to predict how an individual will react following an assault. According to research sponsored by the United States Department of Justice (DOJ), some victims of rape will laugh, some will cry, and some will not show any emotions at all. Sexual assault is not a “normal” experience to have, and thus, there is no “normal” response to it.

Myth: A person who has been sexually assaulted or raped will report it right away.

Fact: When sexually assaulted, victims typically experience a sense that the world has become unbalanced and confusing. They are in disequilibrium – their “normal” view of the world and their place in it has been thrown off balance. They are unable to answer the questions in their head about how and why the event happened and how it will affect their life. This shift in balance often causes the victim to experience a state of internal crisis. DOJ-backed research shows victims will often try to “normalize” the situation to help regain their sense of balance. They may try to convince themselves that it didn’t happen, or that they deserved it. The internal crisis lasts as long as a person needs to organize and develop a way to make sense of the assault. Frequently, victims will not report a sexual assault until after they have overcome this crisis. Some may continue to date the perpetrator or keep the assault a secret, only to report it months or years later.

Myth: Rape and sexual assault usually happen when a woman is attacked by a stranger while walking alone at night.

Fact: More than half of all sexual assaults of women happen at or near the victim’s own home. Additionally, approximately 90 percent of female victims of rape know the perpetrator.

Myth: A lot of people lie about being sexually assaulted or raped.

Fact: The truth is that research suggests that only 2-8 percent of reports of sexual assault are false. This is the same rate of false reports as there are for other felonies. However, there is one major difference between the reporting of rape and the reporting of other felonies. According to studies by the National Victim Center and National Crime Victims Research and Treatment Center, rape is the most underreported crime in America, with only 1 in 6 women reporting their assault to law enforcement.

Myth: If a woman wears revealing clothing, behaves provocatively, or is drinking, she was “asking for it.”

Fact: The common myth that women “ask for” rape, and that only a “certain type of woman” will be raped is unfounded. In fact, research suggests that the vast majority of rapes are planned by a perpetrator who intends to carry out his plan regardless of the victim’s behavior. The perpetrator can and must be responsible for his or her own behavior. There is no behavior on the victim’s part that can justify rape.

Myth: People with disabilities aren’t at risk of being sexually assaulted.